First I will say about a few words about me. I am half indonesian, half german and I live since 3 years in Georgia, Caucasus. Most time I spend in wild mountains or in semi-desert area.

In spring 2013 I was trekking with an estonian friend in the semi-desert area of Shiraki and Samukhi, and since then I wanted to go from there all the way to David Gareji on foot. The problem was to find someone, who was crazy enough to join me for that.

Finally in november 2013 I met an australian boy, who was interested in this. We asked for the permission to go there, it is near the border to Azerbaijan, even the locals need a permission. We got it for three weeks, and started together with a turkish boy from David Gareji heading east to Vashlovani.

First day we reached David Gareji, transport by marshrutka, hitchhiking and on foot. Slept in an empty farm near the monastery. Next day back to the village Udabno, to buy some food and to ask for the way. Nobody could really tell us, because nobody was doing that before. But I knew that we just have to go east. Both days it was very windy, but not cold. We walked that second day about 10 kilometer crossing some hills, and found shelter in an azeri shepherds place. Just two men were there, both could not speak georgian, it was good to have a turkish friend with us, who could communicate with them.

And next morning we continued our way east, this time we were a bit lazy, maybe after 4 kilometer we reached some farm,where an azeri family was spending the winter. They invited us to stay, and it was good, our turkish friend was not used to trek. The turkish boy left me and my australian alone, to go back to Tbilisi. And in afternoon the australian was bitten by the dogs near the farm, he was not using his stick to go out. It didnt seem bad, I was giving him medical assistance and repaired his trousers. We slept in the farm and moved the next day on our road maybe 12 kilometer.

The road was easy to find, but we tried to avoid meetings with dogs. I checked his wounds, but it seemed to be okay. In late afternoon we met some azeri man, who invited us to stay in his place because to the next farm it would be to far to reach before darkness. It was a great place, mixed georgians with azeri. And the wine was damned good.

Another day on the road, we knew we have to find a bridge to cross the Iori river. Were lucky to meet some cowboy, who brought us there and to his farm on the other side of the river. Still early we decided to continue. Slept in an empty farmhouse. Next morning we followed the road, found a big bridge, which we crossed.

But than we could see farms with dogs, and no people around. We decided to follow the paths into a small forest. It took us three or four hours to get out of that. The bushes were mean with big thorns, we could not see the direction, the paths were not used so much, just disappeared between.

Finally we reached the road again, and I could see that our destination for that day is not far anymore. We were already near the Dali lake, Chachuna. Somewhere here should be the mud volcanoes, which I wanted to see. Heading to the first border patrol point near the lake. We got some invitation to stay in the hotel near the lake for free, nice place, I didnt know that it was there.

Next day we were on the way to the mud volcanoes, not on our direction, but I wanted to see that. It is not easy to find, if you dont know where they are. It was a bit strange, I thought it is more impressive. Back to the border patrol and spent the night in the empty farm near the lake.

Every morning and evening I checked my friends wounds and it was okay. Next morning we wanted to cross into the next area, but on our way to the second border patrol station, my friend was feeling bad, and we checked, it looked not good at all. At the border police we asked that they call some car, it was better to go to see a doctor.

In towns hospital he got some vaccination shots, we slept in that hospital, I think never ever I want to be in need of that. My friend was heading back to Tbilisi next morning, because he needed to get more injection at exact days.

I decided to continue alone, I had the permission, it was my idea, I had to do that.
Luckily got a ride down to the lake to the border patrol, slept one more night in the farmhouse and again on the road heading east. Fast I reached the border patrol, from where we were gone by car back to town two days ago. Still early, just going more. I was complete alone, near the river, which was the border to Azerbaijan.

This day I walked about 25 kilometers to reach the first border patrol place in Kesaman area.

I slept near the fire under the sky, one of the soldiers could speak english well.
Next morning got a ride to the big border patrol place. It was good, very cold in morning.

I checked the farms there, and slept there. Border patrol brought me even wood for the oven.
Morning I continued the road heading Samukhi. It was hot in daytime, but no problem to reach the border patrol near Panditshara Canyon, and I stayed for a night again in an empty farm. Nice sunrise that day. And on the road east again.

Near the border patrol picked up by car, funny I jumped out there and almost everybody was greeting me with my name. Just the new major didnt know me. They said I can not continue, but thanks to the letter which I got together with the permission, I could finally go the way I wanted. Slept in an shepherds place nearby, where I knew the people already. And next morning to the last border patrol point to go out of the restricted area.
It was around noon, and I could leave my stuff there, and was heading to Mijnis Kure. To see that place and my final destination.

I did it, I finished it, it was great.
Fast walk it is possible to do it in one week from David Gareji to Mijnis Kure, but better if there is more time. 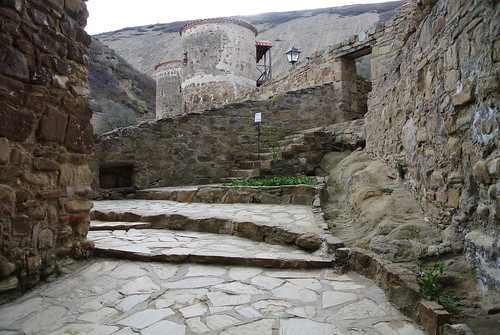